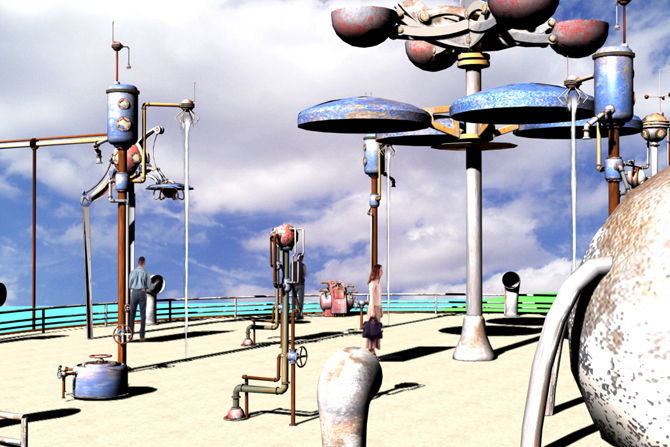 In 2006 I was engaged by Brisbane City Council to develop a concept for a big budget water park.

This work was pivotal for the direction of my art – it offered a lot of money, a lot of space, a place for play. Designing for a playground inspired me, knowing that the decision-making people would allow me more leeway to flex my imagination.

My concept was based on a newly uncovered submarine wreck with Edwardian aesthetics – the mysterious oceanic machine.

I filled an entire journal with drawings and musings, and in order to explain both the Edwardian design, and 21st century additions such as concrete and steel, etc, I developed a story and a timeline, using both real and imagined events.

And thus Franz Andriessen, his revolutionary inventions (which have formed the basis of some of my later works) and an alternate reality of Brisbane were born.

The water park is conceived as a giant relic of an experimental machine that was used to measure natural phenomena in the oceans. It was designed to measure, calculate, observe and collect flora and fauna, improving on existing technologies by studying the ‘unknown’. The relic is viewed much like an iceberg, only the top deck and some perimeter portholes are visible, the rest of the buried relic is left to the public’s imagination.

Everybody loved the design, the go-ahead was there. And then decisions about Brisbane’s worst drought on record meant that all public water features in the city were turned off; there was no way a new park based entirely on water – even if it was recycled – was going to be built.

The project never went ahead, but it was the place that a regular character (Franz Andriessen) and concept (imagined histories) were born.